ExoMars, the ESA/Russia mission en route toward the Red Planet, has turned into a remarkable observing opportunity for asteroid hunters. The post launch outbound trajectory of the spacecraft mimics, in a reverse mode, the challenging detection of a small Earth impactor. The NEO Coordination Centre has therefore organized an international observational campaign with the aim of obtaining ground-based optical observations of the spacecraft. The quick imaging of a very fast moving object with poorly known ephemeris during a short time and location window is a scenario very similar to what would happen if an asteroid were discovered in an imminent impact trajectory with the Earth. Providing tracking data for navigation is also a useful by-product of the campaign. Thus the NEO Coordination Centre has activated its network of collaborating observatories located in the Southern hemisphere, from where the ExoMars spacecraft would have been observable. 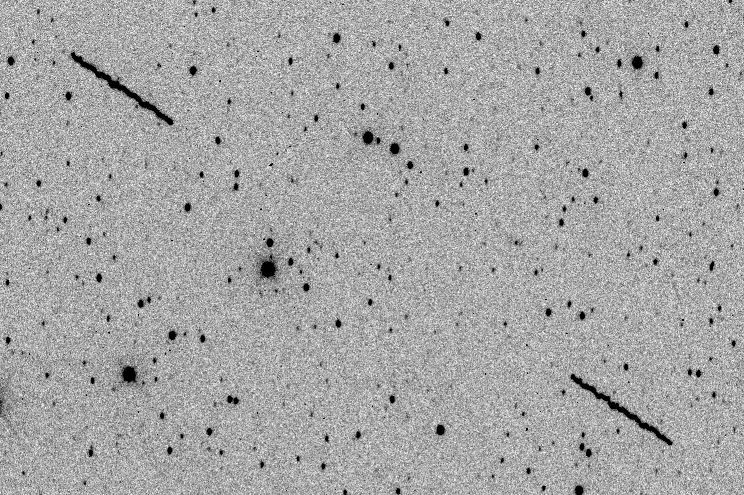 The predicted trajectory of ExoMars was timely converted into the reference frame used to point telescopes by the NEO Coordination Centre based on data provided by the Space Debris Office at the European Space Operations Centre (ESOC, Darmstadt).

A few hours after launch, on Monday 14 March, the NEOCC started receiving feedbacks: after some bad news due to local adverse weather conditions or technical problems, we received the first positive detection in the late afternoon, obtained by Alison Tripp and Sarah Roberts using a 1-meter telescope in Australia.

Here (left image) one can clearly see the two long streaks left by ExoMars and by a fuel tank jettisoned by the spacecraft a few hours earlier. Shortly afterwards, another collaborator, Grant Christie from New Zealand, reported having tracked the same two objects for almost 25 minutes from the Stardome Observatory in Auckland. His pictures could be stacked into an animation (far left image).

ExoMars was then scheduled to have a major engine burn which would send it into an Earth escape trajectory. Meanwhile the Earth was turning and just before midnight the event could be witnessed live from the OASI Observatory team (Brazil) led by Daniela Lazzaro and with Sergio Silva at the telescope. The images they obtained are astounding: the spacecraft appears as a bright object surrounded by at least six other fainter spots – possibly upper stage separation components - moving altogether in the sky (images below). 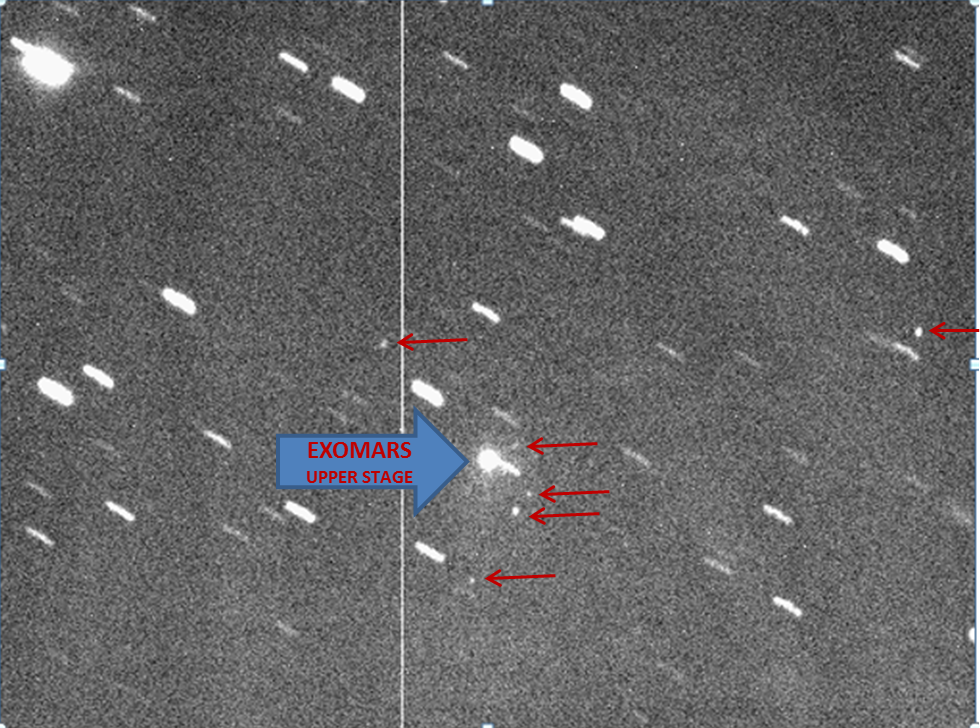 With ExoMars safely disappearing into deep space, the NEOCC observing campaign has come to an end. The remarkable results obtained have been made possible by the commitment of the SSA-NEO Team and by the enthusiastic and passionate response of the observing community, once again collaborative and ready to react even on short notice to new events and opportunities.

Update from 21 March 2016: After double-checking the orbit measurements, it became clear that what we are seeing in these images is the Briz-M upper stage of ExoMars. The spacecraft itself is already further ahead and not visible.