During activities related to ESA's Space-Situational Awareness (SSA) programme, the need for an observation system simulation software tool became apparent. More specifically, the tool was required to be capable of:
- analysing the flux of small NEOs near the Earth
- evaluating the efficiency of all-sky surveys
- evaluating the discovery rate of telescopic surveys
- optimising observation strategies
- improving follow-up and radar observations
- performing risk assessment analysis
- performing trade-off studies on the observational options for the European SSA-NEO Segment (e.g. wide vs. deep survey) or to select locations for survey telescopes
- planning NEO observation campaigns, including the derivation of necessary instrument parameters
- validating algorithms used in the NEOCC (e.g. orbit determination, impact monitoring, orbit improvement, risk assessment, Mitigation)
Based on these requirements, the Near-Earth Object Population Observation Program (NEOPOP) has been developed allowing users to:
- Generate NEO populations based on the newly developed model by Granvik et al. (1)
- Simulate observations of NEO populations using a newly developed optical sensor performance model by Gelhaus
- Analyse NEO populations and NEO population observations
NEOPOP is implemented as a console program and can be operated conveniently through a Graphical User Interface (GUI) that comes with the tool. 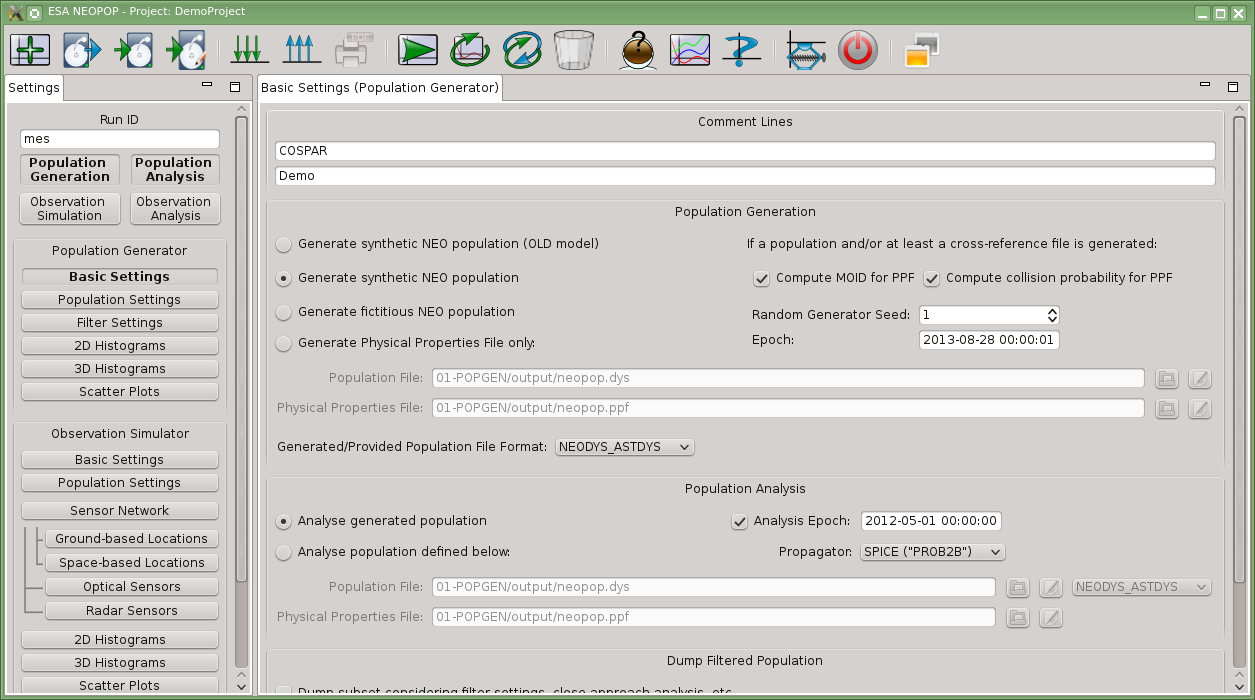 NEO populations may be generated in a random fashion (with parameter value range constraints) or based on a scientifically validated NEO model. NEOPOP is able to create populations based on the outdated Bottke model and on the recently developed one by Granvik et al. (1)

The new NEO model is based on the Catalina Sky Survey observations in the years 2006-2011 and based on more than 4000 NEO discoveries or redetections. It accurately models the NEOs' orbits as well as their absolute magnitudes and albedos.

The model is calibrated in the interval 17<H<25 (where H is the absolute magnitude of the object), and an extrapolation in absolute magnitude H is used to extend the model down to H=15 using two different parameter sets. As the NEO population for H<15 is assumed to be complete, known NEOs are used for this H range. 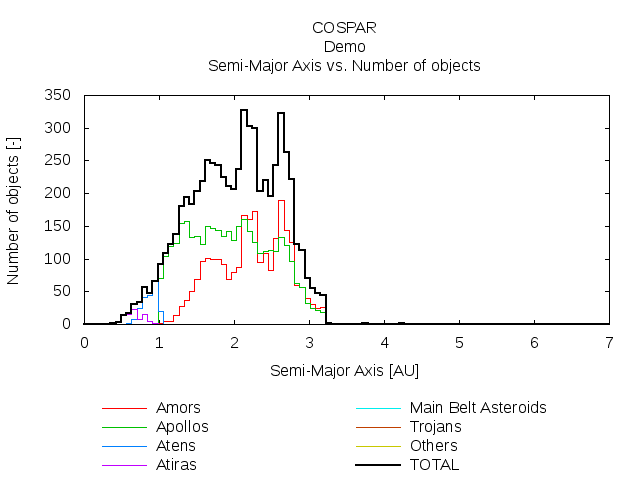 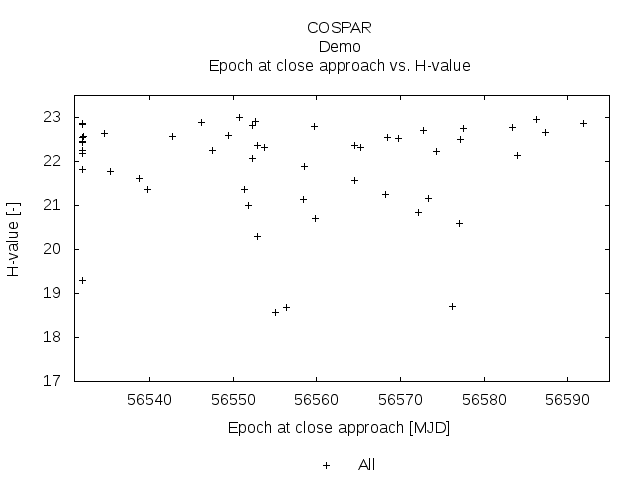 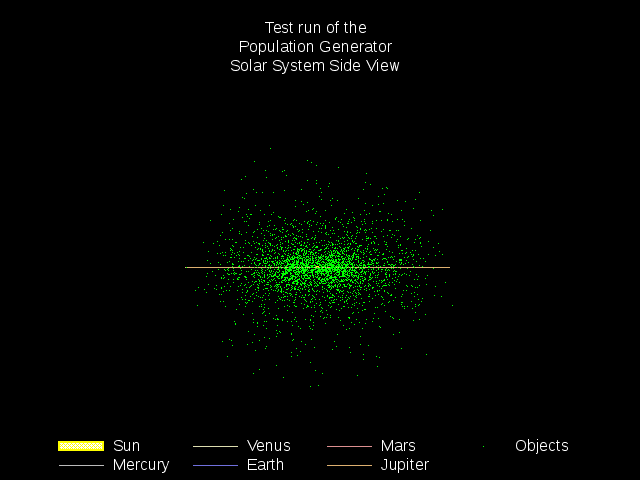 NEOPOP allows the definition of ground- and space-based optical and radar observing systems (called 'sensor systems'). These sensor systems may be simulated deterministically or using an arbitrary number of Monte-Carlo runs. As a result, the tool outputs crossings – the objects that crossed a sensor system's field-of-view – for each sensor system and Monte-Carlo run. Sensor performance models additionally determine if a crossing could be detected by a sensor.
The optical sensor performance model by Gelhaus is particularly sophisticated. It calculates the background signal for a crossing by taking various background sources like planets, stars, galaxies, airglow and zodiacal light into account. It then calculates the object's signal and compares both to the sensor system's capabilities.
It is possible for users to let a sensor system's state change during observation time using observation strategies and to output artificial measurements for the sensor systems.
The observation results are written to text files, and can also be plotted. Additionally, "sky plots" can be created showing the whole sky from a sensor system's point-of-view at a certain epoch. 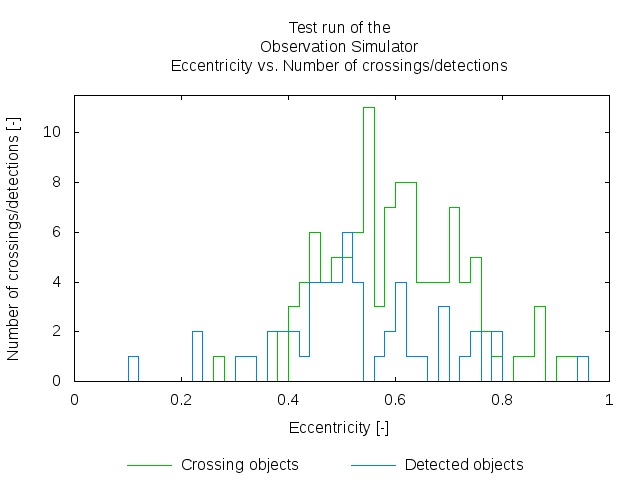 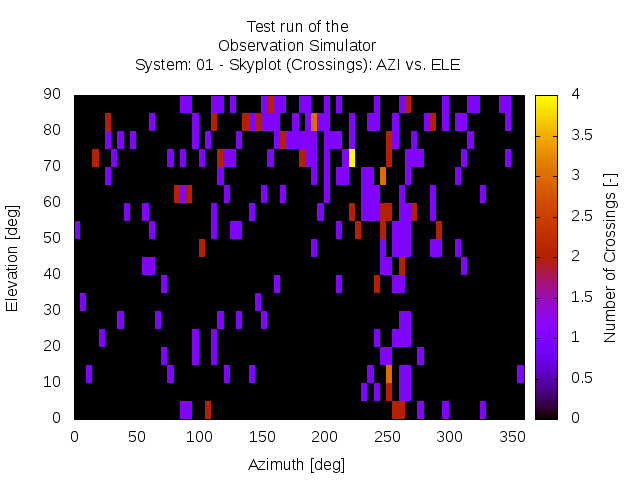