The observational component of NEO science is an extremely important part of the impact mitigation effort, since observations are the input data for all the computational models used to predict future collisions. This post will summarize our effort to ensure that enough data are obtained, especially on the most important and challenging objects, during the short time when they are observable (on the left - A star field containing the near-Earth asteroid 2014 DN112, imaged by the ESO Very Large Telescope in Chile in March 2014; Image credit: ESA/ESO).

At the top of this page there is a counter with the number of objects in the current NEO risk list (their names and details are accessible via the "Risk Page" menu to the left). These are the most important objects to study if you are interested in the danger that asteroids can pose to our planet. This is because they have a non-zero chance of colliding with it over the next century.

However, only a small fraction of them are observable at any given time. And there is more: If you want to point a telescope and collect more data on any of them, you need to know precisely where they are in the sky. In most cases that is a big problem. Of all the known objects which could possibly impact the Earth in the future, approximately 90 % are lost again. This means that the next time they will come close enough to be observable from Earth, we will not know where they will be in the sky. This is  because the uncertainty with which their future position is known increases dramatically with time.

How can we address this problem? There are basically two approaches: we should first do our best to prevent the newly discovered NEOs from getting lost by collecting additional observations to improve the orbit determination process. Secondly, we should make an effort to "recover" some of the old objects the next time they come back, even if their position in the sky is poorly constrained. Because of the importance of these problems, ESA's NEO Coordination Centre organizes a systematic effort to involve multiple observatories and astronomers, in Europe and all over the world, in observing these dangerous asteroids.

Let us start with the most direct way of changing this situation of lost asteroids. On average, one new NEO is discovered every 8 hours. Most of them are found when they are close to us, quite bright and easy to see. Therefore many observations are performed around the time of discovery, both by professional and amateur astronomers worldwide. However, within a few weeks, the objects start receding from the Earth, becoming progressively fainter. When this happens it becomes very likely that no additional data will be obtained, because larger telescopes would be needed. It is not easy to obtain access to these, especially on short notice. This, in turn, means that no additional information may become available, and our evaluation of the danger of the object will not improve anytime soon.

To address this problem, we have or are developing agreements with various professional telescopes, including the ESO Very Large Telescope (VLT) in Chile. The VLT, with its 8.2 meter primary mirror, is one of the most powerful telescopes on the planet. It can easily detect asteroids down to magnitude 26, 100 times fainter than what even the most advanced amateur astronomers can do. Over the last six months we have obtained observations of about 15 such objects. For most of them our detections were sufficient to either clarify that they will not hit the Earth anytime soon, or at least ensure that we will be able to observe them again the next time they come close to the Earth.. Without our observations, most of them would have become new entries in the list of lost objects ( on the right - An animation of our VLT images of 2012 HP13, an NEO with a large uncertainty that we recovered two years after its discovery. The moving object at the center of the frame is a real asteroid, but it was not the target of our search. Can you spot the fainter one (which is the NEO we were looking for)? Hint: it is fainter than the central one, and near the bottom of the frame; Image credit: ESA/ESO). 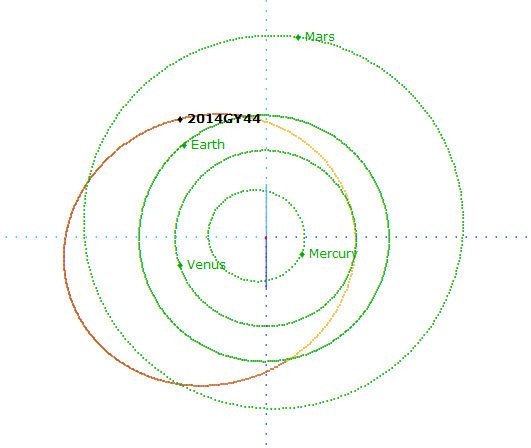 But what can we do when the problem arises from a large uncertainty in their position? If the area of the sky where they can be found is reasonably small, say up to a few degrees in size, one can attempt to use telescopes with a large field of view. These can image a significant fraction of this sky area in a short time, with multiple exposures. The object will likely be visible somewhere in these images. If we can locate it we can then measure its position and improve the orbit enough to make it observable again for years to come (on the left - Plot of the relative position of 2014 GY44 and the inner planets at the time of the VLT observation (1 May 2014), generated using the ESA Orbit Visualization Tool (accessible via this website). The object has an estimated diameter of only 50 meters in diameter and was already more than 36 million kilometers away from Earth; Image credit: ESA). This process, called "recovery", is another one of the goals we are pursuing from the NEOCC, with the help of many cooperating observatories*.

Unfortunately, there are some objects which are now too faint and too far to observe with even the most powerful telescopes on Earth (on the left - An animation of our VLT images of 2012 HP13, an NEO with a large uncertainty that we recovered two years after its discovery. The moving object at the center of the frame is a real asteroid, but it was not the target of our search. Can you spot the fainter one (which is the NEO we were looking for)? Hint: it is fainter than the central one, and near the bottom of the frame; Image credit: ESA/ESO). Next time they will become bright enough to see, their uncertainties will be huge, too large for even the largest cameras in the world. Some of them, such as the large asteroid 1979 XB, are so hopelessly lost that at their next apparition they can literally be anywhere in the sky!

Fortunately, at least in some cases, there is a way out. More on this in our next story… stay tuned!

*If you have access to a large telescope (anything that can reach magnitude 21 or fainter), and want to collaborate with us, please let us know.