The number of known Near-Earth Asteroids has just overcome 10,000 units! This result represents an important achievement if one thinks that over the one hundred years between 1898 (when the first NEA, 433 Eros was discovered) and 1998 only about 500 NEAs had been found, while the current NEA discovery rate is about 1,000 per year.

Out of the 10,000 discoveries, roughly 10 percent are larger than one kilometer in size, while the vast majority of NEAs are smaller than that, with the number of objects of a given size quickly increasing as the size decreases.

The first and most important step to protect our planet from NEAs is to discover all objects potentially at risk of collision with the Earth and in doing so the present wide-field, high-sensitivity sky surveys have proven extremely effective, putting astronomers are on the right track. 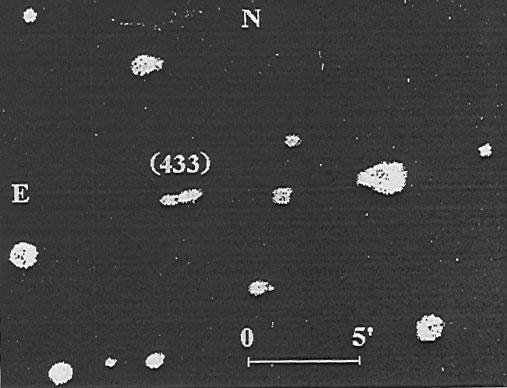 The elongated track left by 433 Eros is clearly visible in the discovery plate of the first NEA taken by Gustav Witt from the Observatory of Berlin. More details on the story behind Eros discovery at http://spaceguard.iaps.inaf.it/tumblingstone/issues/num20/eng/eros.htm

The number of known near-Earth asteroids (NEAs) has just surpassed the threshold of 15000. That is a 50% increase over the number known in 2013, when we posted a similar news item on our portal for the crossing of the 10000 threshold.