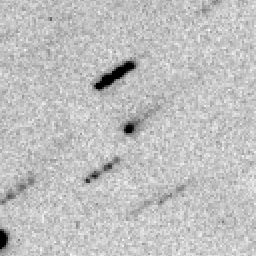 Image of C/2018 Q4 (Borisov) obtained on the morning of 9 September with the 70 cm telescope at Chuguev, Ukraine.

Over the past week, the Near-Earth Object (NEO) community in general, and ESA’s NEO Coordination Centre (NEOCC) in particular, have been involved in an interesting example of the process of discovering a new and exceptional object.

On 30 August 2019, Gennady Borisov, an amateur astronomer in Crimea, reported the discovery of a new object, likely cometary, to the Minor Planet Center (MPC). The object was given the temporary designation "gb00234" by the discoverer. As happens with all new peculiar objects, the corresponding observations were posted by the MPC on the NEO Confirmation Page. This is the place where new unconfirmed discoveries are presented to the community, in order to obtain the follow-up needed to characterise their orbits.

Within a few days, additional observations were collected. On 8 September 2019, the Scout alert system currently operating at NASA's JPL reported that the available data seemed to suggest this was not an NEO, nor a normal comet, but something far more unusual: its orbit seemed to be too eccentric to be gravitationally bound to our Sun. This could be the second case of an interstellar object discovered transiting our Solar System.

When this happened, we at the NEOCC, together with collaborators all over the world, started acquiring and analysing additional images of the object. Among them were some images obtained via our collaboration with the International Scientific Optical Network (ISON), using the 70 cm telescope in Chuguev, Ukraine. The images revealed that the object was indeed cometary, showing a nice tail almost an arcminute long. The corresponding astrometry further reinforced the determination that the comet's trajectory was indeed hyperbolic.

The object is unfortunately very close to the Sun, and therefore difficult to observe, because it is always located low on the horizon at twilight. Consequently, additional checks and verifications were needed to prove that the hyperbolic orbit was not an artefact of some problem with the observational data. After three more days of observations, collected all over the world, the MPC finally announced the object as C/2019 Q4 (Borisov), noting that the orbit is hyperbolic.

As of today, we know that C/2019 Q4 has an orbit with eccentricity of about 3.5, and entered our Solar System with a velocity of about 30 km/s. It will reach the closest distance to the Sun in early December 2019, at two astronomical units, and it will then reach about the same distance from the Earth later the same month. It is a bright object, currently at magnitude 18, so it will remain observable from the Earth for years, giving astronomers a great chance to study it in great detail.

For more information you can read ESA’s dedicated news at https://www.esa.int/Our_Activities/Space_Safety/Interstellar_2.0