While the sky becomes more and more continuously scanned by ground and space-based NEO surveys, discovering objects in unusual orbital configurations represents the new frontier. Their dynamics translates into peculiar visibility conditions thus calling for smart observation strategies. Tunguska-class (i.e. 30-60 meter size) objects in orbits closely resembling that of the Earth turn out particularly elusive due to their faint appearance and the long synodic period. The only chance to spot them in the sky is when they, from time to time, come close to our planet, crossing the night sky at high declinations. This is the case for asteroid 2012 DA14, discovered from the La Sagra Observatory, in southern Spain, on 23 February 2012 (a detailed account is posted at the observatory web site http://www.oam.es/Asteroid_2012DA14.htm). 2012DA14 is a 45 meter NEO which exhibit an interesting dynamical behaviour characterized in the 2001-2013 timeframe by yearly close approaches to our planet (http://newton.dm.unipi.it/neodys/index.php?pc=1.1.8&n=2012DA14) down to distances smaller than the geostationary ring where most telecommunication satellites reside. Even if 2012 DA14 will not impact the Earth it poses the challenge of how to discover these objects with a warning time large enough for mitigation. A space-based observatory in a "strange" orbital configuration has been proposed to this end. 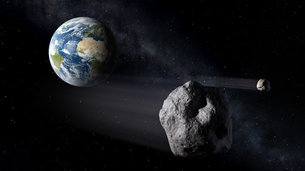