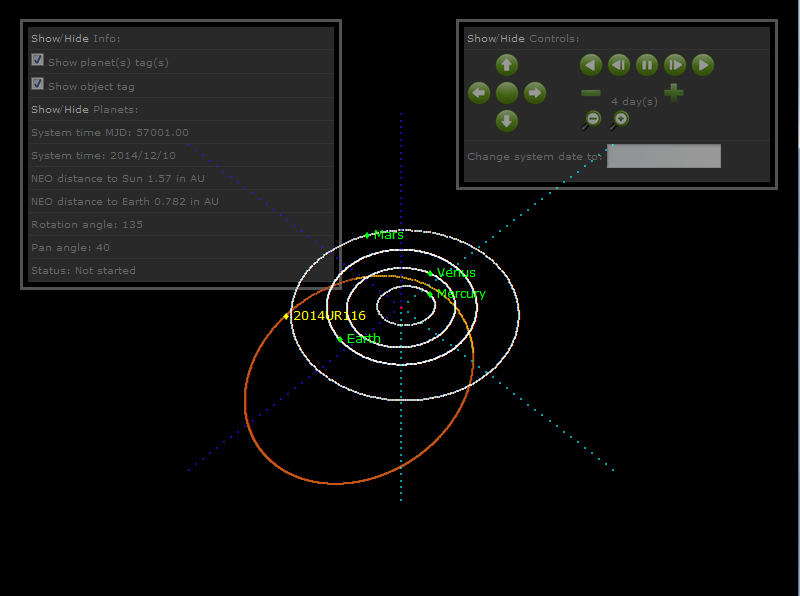 The recent claim that asteroid 2014 UR116 may be threatening the Earth shows how difficult it is to convey the right message about the NEO hazard.
The no-news spread after statements from the discoverers: the asteroid was no imminent threat but if, in a not yet foreseeable distant future, it hit the Earth then due to its large size (400 m) the effects would be devastating. Of course this is true for many NEOs, highlighting that the real challenge in communicating the asteroid hazard is to correctly handle the dangerous mix between reassuring and threating information. There is the need for authoritative sources, not only of NEO data but also for disseminating unambiguously to the public and the press the related information.
This is why the International Astronomical Union has appointed as reference sources for NEO impact monitoring data the NEODyS and Sentry systems (running at the University of Pisa, Italy and at JPL, USA, respectively). It also motivates the establishment of the NEO Coordination Centre of the European Space Agency: relying on the NEODyS computational engine it disseminates data and provides services on the NEO hazard toward a wide range of different users and stakeholders.
The more experienced user can rule out any short-term threat by simply displaying the 2014 UR116 Summary Page of ESA's NEO web portal at http://neo.ssa.esa.int: the MOID (Minimum Orbit Intersect Distance) value of 0.0288 au of the asteroid implies that the closest approaches could now occur only at a safe distance of nearly 5 million km. A fact that can also be visualised by opening the Orbit Visualization Tool, which allows to move the orbit in space and understand the underlying orbital geometries.