The word "precovery" has entered the astronomical jargon rather recently but it quickly grew in popularity among asteroid hunters. It refers to the finding of an archival observation of an object which was not recognized as such because the corresponding image originally served other purposes. Hence the name "precovery", which explains why we may have direct measurements of an asteroid position at a time well ahead its discovery date. Searching for precoveries is a powerful technique for NEO impact monitoring. It allows to extend the observational arc of an object leading often to a dramatic improvement in its orbit knowledge without the need of additional telescope time. Although extremely rewarding, it is a tricky business which requires peculiar skills. The past trajectory of the asteroid (including uncertainties) must be assessed in order to start searching and retrieving candidate images from astronomical databases all over the world. A careful inspection looking for a faint spot close enough to the expected location is then carried out.

The case for 2016 WJ1 is no exception, but with a further taste of complexity: a chain of precoveries brought the NEO Coordination Centre to catch a view of the asteroid position as far back as July 2003. 2016 WJ1 was discovered on 19 October 2016 by the Catalina Sky Survey. When impact monitoring systems were run , the object turned out to be rather peculiar, with more than 200 dates within the next century when an impact could not be excluded with certainty. However, the highest probability for any of these events was quite low, about 1 in 80 000. 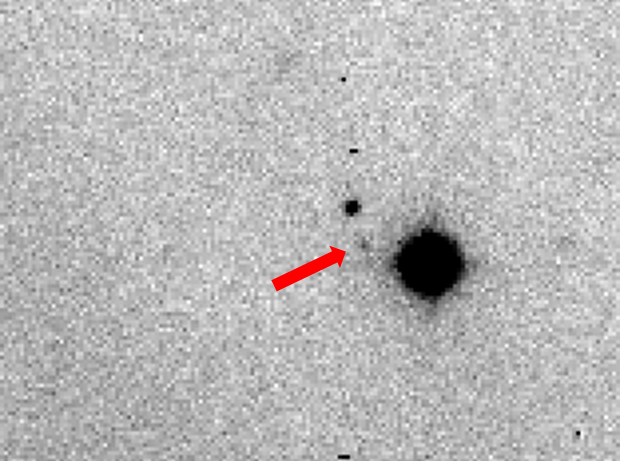 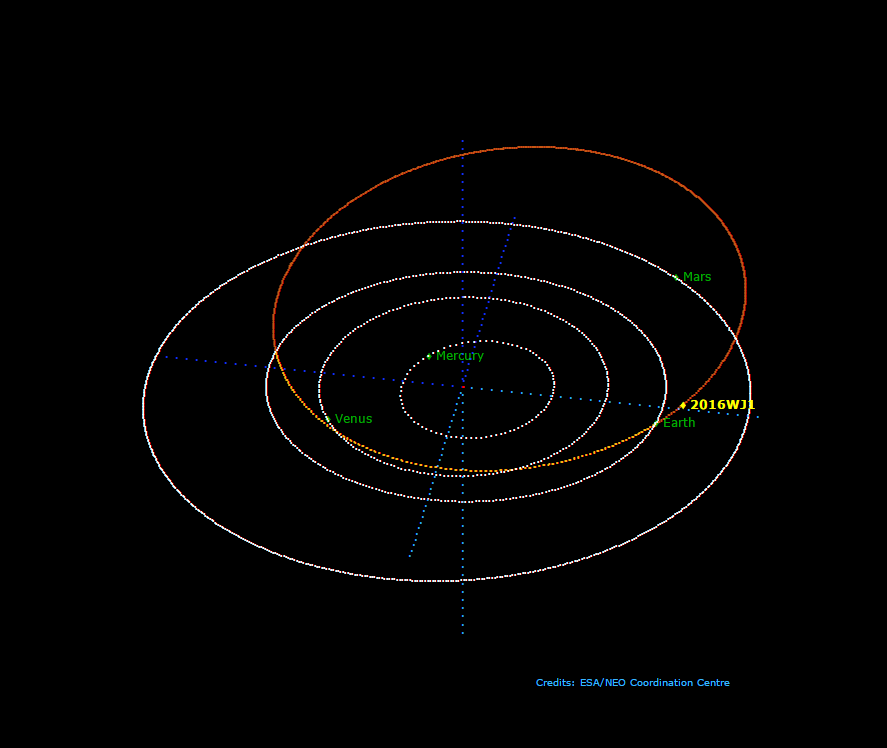 Over the following days new observations were collected and when the impact predictions were recomputed some of the possible dates were discarded, but others became associated to a higher hazard. In particular, a possible close approach in June 2065 was now showing an impact probability of about 1 in 8000, enough to classify an object of this size at level 1 of the Torino scale (out of 10 levels). 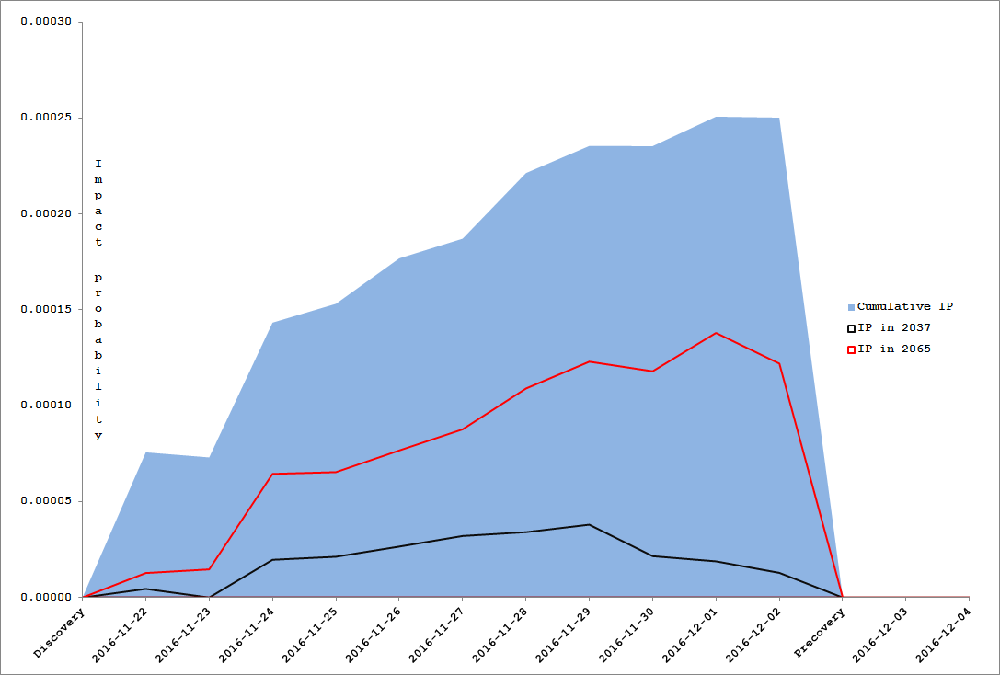 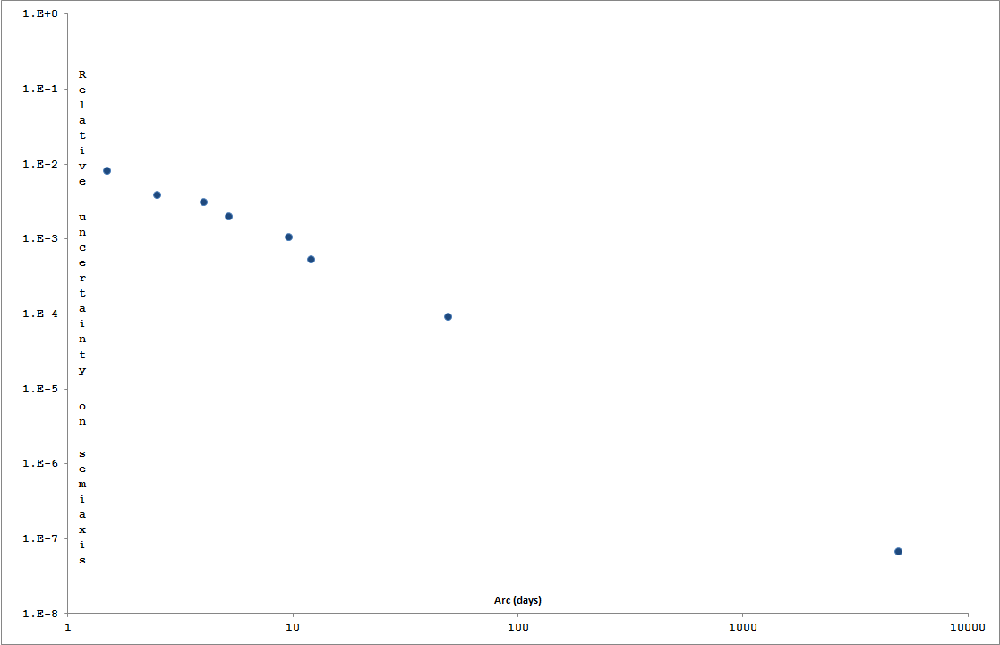 The left panel shows the behaviour of the impact probability over time for two possible impact dates and its cumulative value (blue area). Note the steady increase and the almost sudden drop to a value difficult to appreciate in the scale of the plot, after the 2003 precovery observation was found. The right panel shows how the accuracy with which the 2016 WJ1 semimajor axis was known, increased with the length of the observed arc, significantly extended by precoveries.

Usually additional follow-up observations are likely to remove the possible threat, but for 2016 WJ1 this was not the case. Those collected during the subsequent week, including some from our team with ESA's OGS telescope in Tenerife, did not significantly change the impact scenario. However, they did improve our knowledge of the asteroid's orbit enough to start searching for precoveries.

The archives of the survey telescope Pan-STARRS revealed a promising set of images taken on 13 October 2016. An extremely faint source was indeed spotted at the expected position, but it was so barely visible to prevent deciding whether it was the footprint of 2016 WJ1 or just a fortunate alignment of noise features. Yet the information was not useless: pretending that the Pan-STARRS detection was true, the asteroid orbit was refined to the point of allowing us to push the search further back in the past - until a couple of decades ago. Were another object to be found following the new predictions, this would confirm that the Pan-STARRS faint detection was indeed correct.

The Canadian SSOIS image search system, one of the most efficient on-line precovery services available, with which the NEO Coordination Centre is collaborating, was used to this end. Two sets of images taken on 4 and 5 July 2003 with the Canada-France-Hawaii Telescope, where the object should have been visible, were retrieved. After careful inspection we were able to locate the object only 4 arcminutes away from the prediction based on the Pan-STARRS detection.Accurate astrometry was promptly extracted from these images and the outcome was lowering the probability associated to possible impact scenarios to safer values.

Following asteroid footsteps backward in time is an exciting game, to which a future development of the ESA SSA-NEO Segment is likely to provide a significant contribution: the deployment of the so-called "Fly-Eye" telescopes. Aimed at NEO discovery they will cover the whole visible sky every night thus making available a huge database which in the long run will greatly increase the chances of carrying out successful precoveries.