This October marks the 10-year anniversary of the web portal deployed and operated by the NEO Coordination Centre (NEOCC). Prior to that, the NEO Segment of ESA’s Space Situational Awareness Programme had released a contract for the development of the web portal with the aim to host all related NEO contents in the field. The release of the NEOCC web portal actually predated the official inauguration of the NEO Coordination Centre at ESRIN, which occurred in May 2013.

The initial portal set-up was based on federating several information sources that were available at the time plus some additional new functionalities. When released, it already included the following functionalities: the risk page and the close approaches list (as obtained from the NEODyS portal at that time), the observational priority list (as provided by INAF), an orbit and flyby visualisation tool developed for the portal, an NEA database search function and the EARN physical properties database (as provided by DLR).

The first news that we released was on 12 October 2012, where we discussed the rediscovery of asteroid 2008 SE85. The object had been discovered by the Catalina Sky Survey back in September 2008 and had been subsequently lost. An amateur astronomer, Erwin Schwab, was able to find it again by making use of ESA’s Optical Ground Station (OGS) in Tenerife, Spain.

As time passed, new functionalities were added to the portal step by step. This included: the FITS image database, a fireballs database, a discovery statistics page, the NEO chronology (as kindly provided by Karel van der Hucht) and many other pages. Further to that, our portal started providing orbits as calculated by ESA’s own orbit determination software from November 2018 and own impact monitoring information from November 2020. Some tools are also provided in the portal as the NEO Population Tool (NEOPOP) and the NEO Propagation Tool (NEOPROP). We also added the possibility to have automated access to the portal data from November of 2019.

After more than eight years in operation, we released in March 2021 a full new version of the portal adapted to new web standards. Very recently, at the end of last September, we released a set of graphical tools that represent a relevant change on how the trajectories of asteroids and their observability can be visualised. 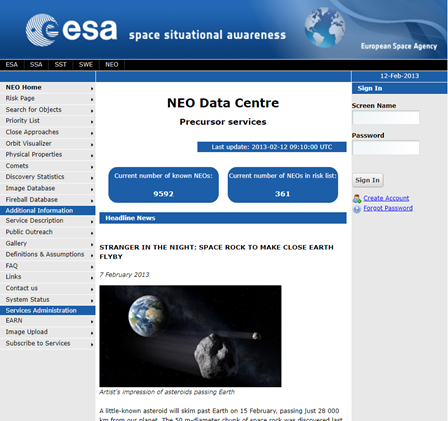 Snapshot of the old NEOCC web portal as of February 2013. Credit: ESA / PDO