Last month, ESA's near-Earth asteroid coordination centre triggered a series of European observations that confirmed an unknown object was, in fact, of human origin (on the left - Artificial object 2013 QW1 as imaged by Telescopio Nazionale Galileo/TNG (Copyright TNG/Telescopio Nazionale Galileo)). The confirmation was the Centre's second such success in recent months and demonstrates the effectiveness of the Agency's asteroid-monitoring activities.

On 23 August, a rather unusual object was spotted in the sky by the US PanSTARRS asteroid survey and provisionally named 2013 QW1. The suspected near-Earth object (NEO) was moving in an Earth-centred orbit, leading astronomers to ask: was it natural or artificial?

If artificial, it would not be the first time that an asteroid-hunting survey had rediscovered a lost rocket stage wandering in space close to the edge of our planet's gravitational reach.

Another object found in 2002 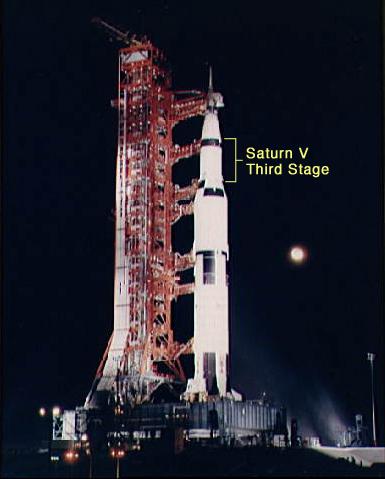 For example, when the third stage of the Apollo 12 mission (on the right - Apollo 12 at Pad A, Launch Complex 39, Kennedy Space Center (Copyright NASA)) failed to crash on the Moon as planned (NASA used such impacts to generate ‘Moonquakes' that could be studied by lunar seismographs to gain information on the Moon's interior), its subsequent orbital evolution was alternatively dominated by the attraction of the Sun and Earth.

The object was eventually rediscovered in 2002 as a temporary satellite of Earth, and its manmade origin was revealed by analysing the light reflected by the rocket body, which did not resemble that of an asteroid but rather revealed the titanium-enriched white paint used at that time for the Apollo rockets.

However, for the mysterious 2013 QW1, things were not that simple, and further observations were needed to determine whether it was artificial or natural.

That's when ESA's NEO Coordination Centre became involved, sending an alert to a number of collaborating observatories in Europe to trigger additional observations that might help to confirm the object's identity. 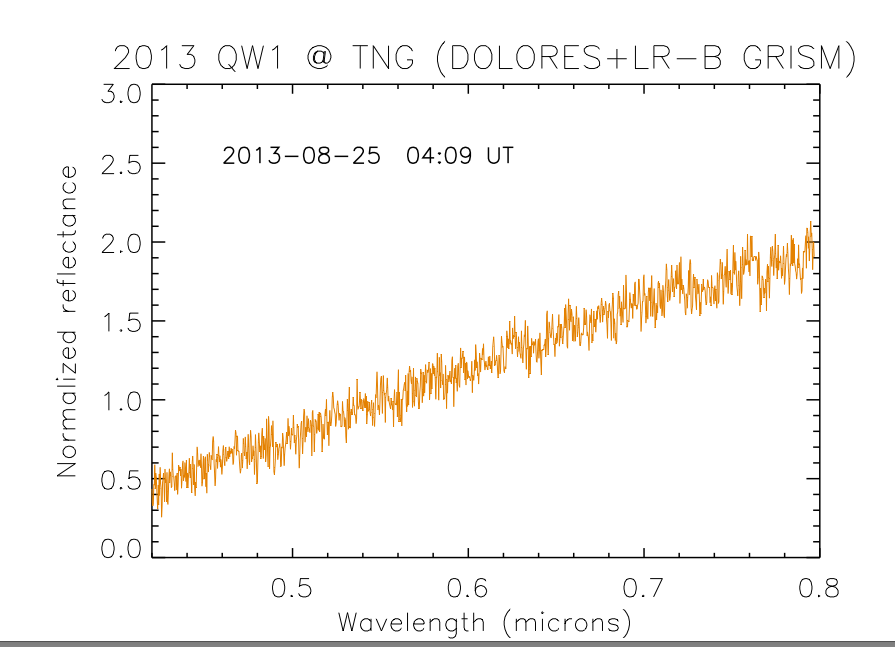 European astronomers up to challenge

The challenge was taken up by a team led by Elisabetta Dotto at INAF–Osservatorio di Roma, and Davide Perna and Maria Antonietta Barucci at the Observatoire de Paris, Meudon, who obtained time on the Italian Telescopio Nazionale Galileo to capture light reflected from the object (on top - 2013 QW1 Spectrum; Copyright Observatoire de Paris/D. Perna and Maria Antonietta Barucci).

"It was a bit of a challenge, because the object was moving fast with respect to a typical suspected NEO," said Dr Perna.

"But despite the difficulties, observations were made with an instrument called DOLORES, for ‘Device Optimized for the LOw RESolution', which allowed us to obtain the object's spectrum."

The result was a spectrum that does not resemble any asteroid. Instead, it bore strong similarities with the spectra of previously observed space junk such as discarded rocket stages, abandoned boosters or defunct satellites.

These measurements provided convincing evidence of the artificial nature of 2013 QW1 – it is possibly a booster stage – and supported it being removed from ESA's NEO catalogue and included, under the name 2010-050B, in the Minor Planet Center's Distant Artificial Satellite Observations list.

ESA's coordinating role
The event highlights the coordination role that ESA's new NEO Coordination Centre is playing in addition to its primary function of providing information on all known NEOs, including their orbits, impact risk and close approaches to Earth.

"The observations by European astronomers coordinated by ESA demonstrated a very quick reaction in getting high-quality data that conclusively identified the object as artificial, and hence no threat," says Detlef Koschny, responsible for NEO activities at ESA's Space Situational Awareness programme office.

"Our Centre has again shown it is serving as a focal point for coordinating observations which are vital for the European and international community involved in asteroid science, impact monitoring and mitigation."