For the second time this year, a small asteroid has been discovered before impacting the Earth. This time the discovery came from the Catalina Sky Survey, one of the major projects dedicated to the discovery and follow-up of NEOs, and already responsible for the discovery of the first three such cases between 2008 and 2018.

The new asteroid, now officially designated 2022 WJ1, was first imaged by the 1.5-metre Mt. Lemmon telescope at 04:53 UTC on 19 November, but the object was first reported to the MPC at 05:31, once 4 observations made it detectable by the automated pipelines running at the telescope.

Within a few minutes, ESA's own internal monitoring software reported that, based on the just-published astrometry, the object had a ~20% chance of being on a collision course, possibly hitting somewhere in North America 2 to 3 hours later. A few minutes later all other impact monitoring programs also sent alerts outlining a similar scenario.

Excerpt of the first impact assessment by ESA’s tool Meerkat as reported at 05:36 UTC, indicating an impact probability of ~20%. Credit: ESA / PDO

Within minutes of the notifications, observers at the Catalina Sky Survey, and elsewhere in the US, started obtaining follow-up observations of the new asteroid. In less than 30 minutes from the initial trigger, the impact became confirmed, thanks to newly reported observations. Shortly after, even more astrometry became available, sufficient to pinpoint the location of the impact point with excellent precision: the small asteroid, likely less than a meter in diameter, was going to impact somewhere between Lake Erie and Lake Ontario, near the US-Canada border, around 08:27 UTC. 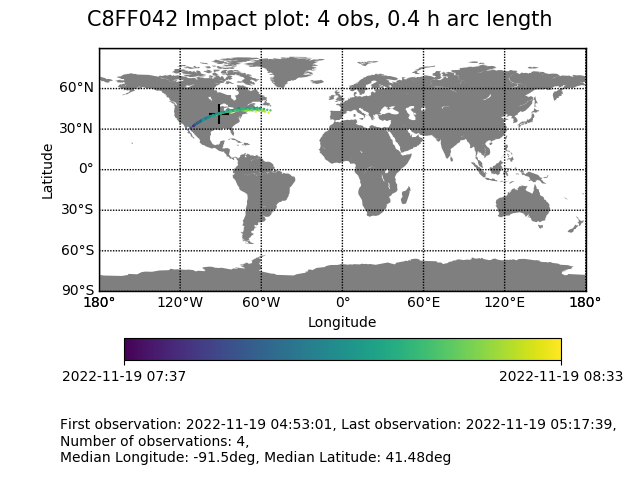 And, at exactly the predicted time, a fireball event indeed happened at the expected location, observed by hundreds of people in the Toronto area and elsewhere and by many surveillance cameras. Soon, photos and videos also surfaced, providing a fantastic view of the event, and its incoming trajectory.

It is likely that fragments of the meteoroid may have survived the atmospheric entry, reaching the ground. The largest ones probably fell somewhere offshore the Southern coast of Lake Ontario, but some smaller ones may have landed near the Canadian city of Grimsby. Searches are ongoing, stay tuned! 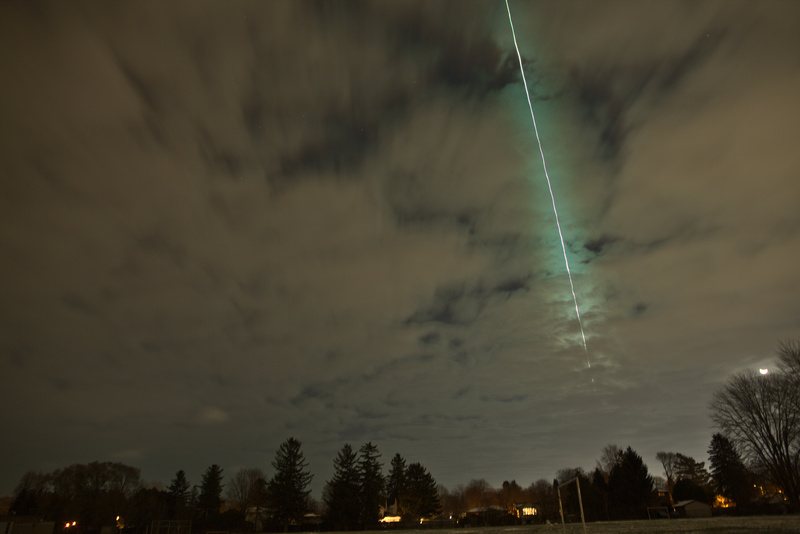 Image of the fireball produced by 2022 WJ1 at atmospheric entry. Credit: R. Weryk