In the last SSA-NEO observing run on Tenerife, we have imaged an object on the NEO Confirmation Page called SW40nU (now called comet C/2012 T5), discovered by the Spacewatch survey. It turned out to be a comet. This image shows a stack of all obtained images on 15 Oct 2012 at 23:29 UT, tracked on the object. The new comet is in the center of the image, the short tail is clearly visible arching to the right of the object. Because the image was tracked on the comet, the stars are trailed lines. Data for this object has been submitted to the Minor Planet Center and the Central Bureau for Astronomical Telegrams. 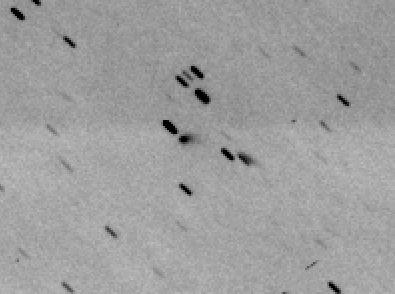