Thanks to new observations collected since December 2020, the well-known non-gravitational phenomenon known as "Yarkovsky effect" has now become clearly detectable on (99942) Apophis. The effect manifests itself in the motion of the asteroid as an additional tangential acceleration. This can be included in the orbit determination process as an additional parameter of the fit, usually labelled A2.

As a consequence of the improved orbit determination that now includes the estimation of A2, ESA's NEOCC, in agreement with JPL's CNEOS and NEODyS, has performed a revision of the Apophis impact hazard assessment.

The new results have been generated considering all the available measurements up to 17 January 2021, including both optical and radar observations, and the Yarkovsky parameter in the process. The coefficient of the Yarkovsky acceleration can now be estimated as (-2.65 ± 0.23) 10-14 au/d2.

Once the orbit determination was completed, the impact monitoring process could be executed based on a generalised "line of variations" method, where, beyond the six orbital parameters, also the Yarkovsky parameter is included. As a result, the updated impact probability for the possible impact of Apophis in 2068 is about 1 in 900 000, corresponding to a Palermo Scale value of -3.86.

The new computation has been released on the NEOCC website on 21 January, and the revised table of possible impacts is available here. 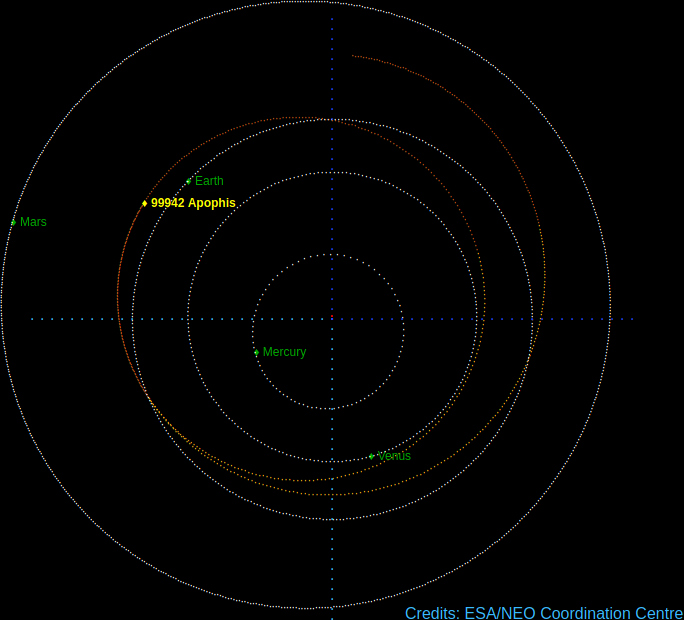