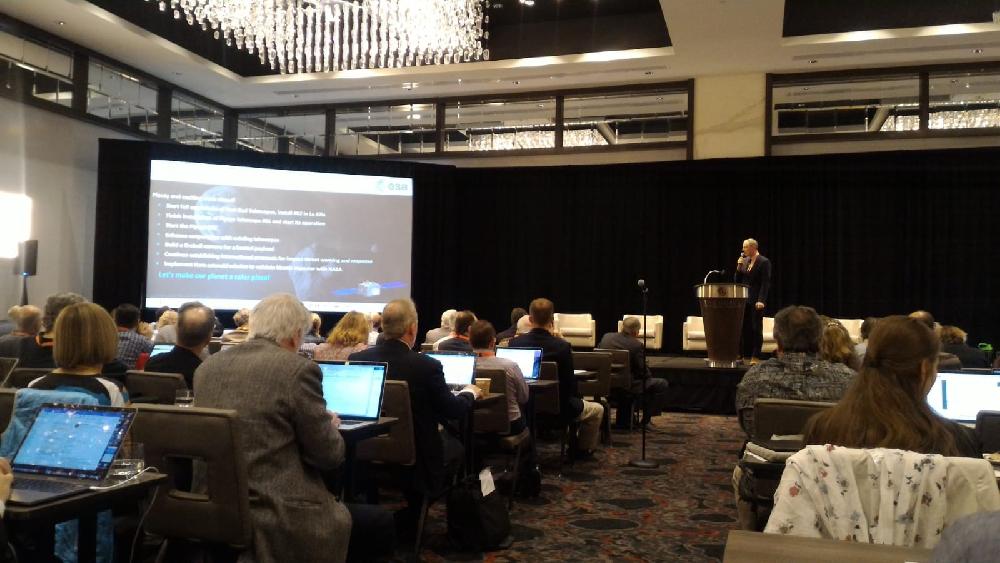 Secondly, the responsible of the NEO Coordination Centre Information System, Juan L. Cano, provided a talk about the recent evolutions in the NEOCC System. The most important additions to it have been the incorporation of the Orbit Determination System and the Impact Monitoring System, both migrated from NEODyS.

Later, NEOCC’s astronomer, Marco Micheli, presented a summary of the observational activities carried out at the NEOCC. Among the multiple collaborations of our team, he spoke of the routine use of the Optical Ground Station (OGS) telescope in Tenerife and the fruitful collaboration with ESO’s Very Large Telescope (VLT), located in Chile, to perform follow-up of interesting NEAs.

Lastly, PDO’s Segment Co-manager, Detlef Koschny, provided a talk on Tuesday about the possibility to launch a cubesat mission to asteroid Apophis based on the M-ARGO concept. Apophis will have a very close approach to Earth in April 2029 and this will represent a fantastic opportunity to fly a mission to this NEA.

ESA’s representatives also participated very actively in the discussions associated to the simulated impact scenario and proposed a number of solutions that were discussed and agreed by the different working groups.

Participation on social media was very significant, especially on Twitter through ESA Operations account, and through two Facebook Live discussions, one done by Rüdiger Jehn and another one participated by Kelly Fast (NASA), Romana Kofler (UNOOSA) and Juan L. Cano (ESA).

In summary, the presence of ESA at the PDC this year has been of remarkable importance. The meeting has also allowed increasing the level of communication within the planetary defence community and fostering related initiatives as the one associated to the Hera mission. Statements of support were agreed and released for the Hera mission, the NEOCam mission and the Apophis 2029 opportunity.