A new series of images from Gemini Observatory shows Comet C/2012 S1 (ISON) heading toward an extremely close rendezvous with the Sun. The images have been takenbetween February and May 2013 and show the comet's remarkable activity despite its current great distance from the Sun and Earth (730-580 million kilometers; or 4.9-3.9 A.U. from the Sun, just inside the orbital distance of Jupiter). Each image in the series is taken with the Gemini Multi-Object Spectrograph at the Gemini North telescope on Mauna Kea, Hawaii.

Discovered in September 2012 by two Russian amateur astronomers, Comet ISON will come to perihelion on 28 November 2013 at a distance of 0.012 AU (1,800,000 km) from the center point of the Sun. Accounting for the solar radius, the comet will pass approximately 1,100,000 km above the Sun's surface. This will be a very close pass. With a fairly large nucleus, estimated in the 1 to 10 km range, the comet will surely undergo strong radiation and tidal stresses and a tidal breakup is not an improbable outcome of the graze. But if Comet ISON survives that close encounter, the comet may appear in the morning sky before dawn in early December and become one of the greatest comets in the last 50 years or more. 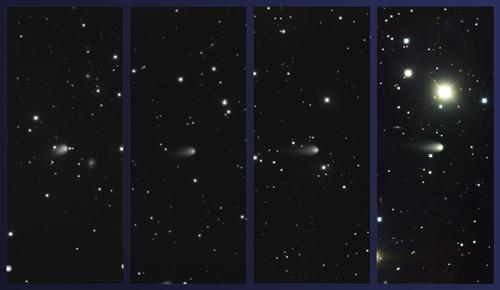 Images of Comet ISON obtained using the Gemini Multi-Object Spectrograph at Gemini North on February 4, March 4, April 3, and May 4, 2013 (left to right, respectively; Comet ISON at center in all images). Credit: Gemini Observatory/AURA.